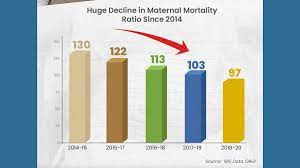 MMR: The number of maternal deaths during a given time period per one lakh live births.

The number of states which have achieved the Sustainable Development Goal target has now risen from six to eight leading with Kerala, followed by Maharashtra, Telangana, Andhra  Pradesh, and  Tamil Nadu. Reacting to a new milestone in MMR, Union Health Minister Dr. Mnasukh  Mandaviya credited it to the various healthcare initiatives of government to ensure quality maternal and reproductive care.