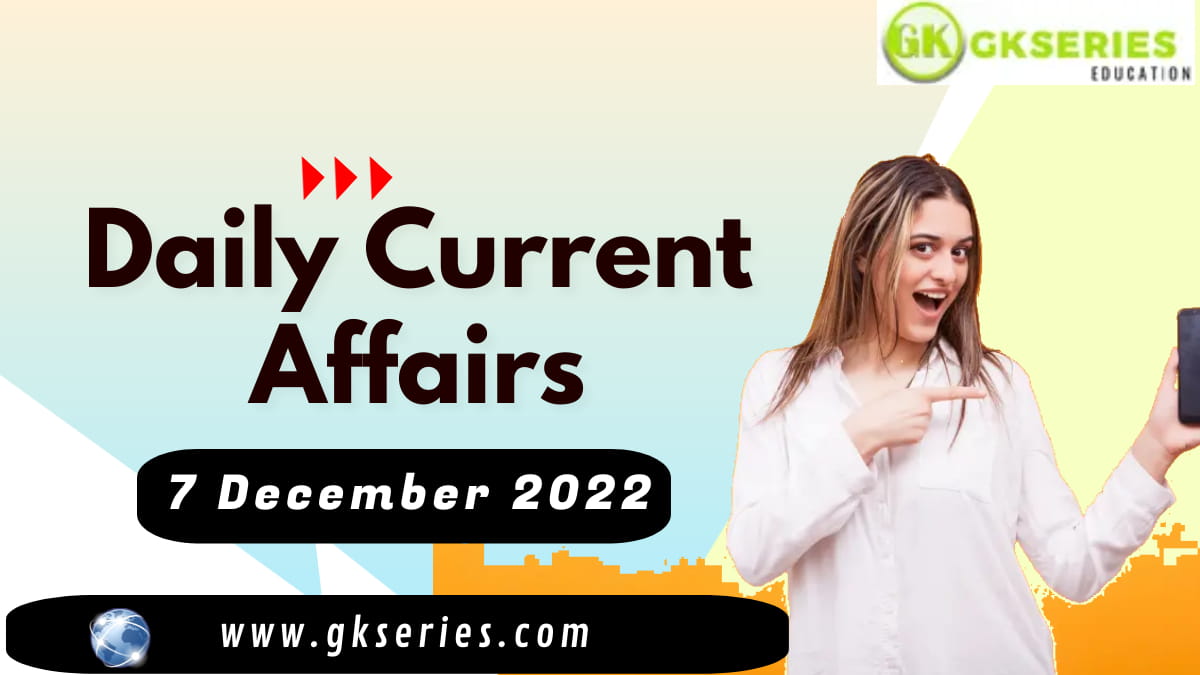 Current Affairs is the most important area in all competitive exams. But the difficulty level is very high. That’s why; many aspirants get confused, how to select Current Affairs for Preparation of Competitive Examination? In this Post, Daily Current Affairs 7 December 2022, we have tried to cover each and every point and also included all important facts from National/ International news that are useful for upcoming competitive examinations such as UPSC, SSC, Railway, State Govt. etc.

How is the day celebrated?

The day is celebrated to acknowledge how flights have made the world more accessible and travelling easy. The goal of International Civil Aviation Day is to increase public awareness of the value and contributions made by the aviation industry across all sectors. The ICAO is backed by governments, organizations, companies and even individuals. On this day it hosts a variety of activities and events like seminars, informative sessions, and news announcements regarding civil aviation topics amongst many others.

ICAO has decided that from now until 2023, “Advancing Innovation for Global Aviation Development” will be the theme of International Civil Aviation Day. Every five years the ICAO selects a special anniversary theme for the global day. However, for the years between the anniversary, the UN body select a theme for four years.

In 1944, 54 nations came together to sign the Convention on International Civil Aviation, also known as the ‘Chicago Convention’. The convention approves the rules of airspace, aircraft registration and safety. It was in 1994, as part of ICAO’s 50th anniversary that International Civil Aviation Day was established keeping in mind that the future development of civil aviation will let the nations and people of the world bond and have friendly ties. Following that, the UN General Assembly advised states and other pertinent organisations to take the necessary actions to recognise this day.

National Armed Forces Flag Day 2022: India celebrates Armed Forces Flag Day every year on December 7 in order to raise donations for the welfare of the armed forces staff. This day is observed to honour Indian soldiers, sailors, and pilots. The day also pays tribute to hundreds of thousands of men who have died protecting the country.

The Indian Armed Units, which are made up of the Indian Army, Indian Air Force, and Indian Navy, organise a variety of events on this day to celebrate the achievements of our army’s units and personnel. The general public participates in the day’s celebrations by signing up as volunteers and assisting with the collection of cash, stickers, and other goods. Many patriotic activities are planned to promote public involvement and to recognise the contributions of the country’s armed services.

The local offices of the Kendriya Sainik Board in India, a division of the Ministry of Defense, are in charge of managing the money collecting. It is overseen by the governing committee, and both official and unauthorised voluntary organisations keep a watch on it.

UP CM Yogi Adityanath launches ‘One District One Sport’ scheme

UP CM Yogi Adityanath launches ‘One District One Sport’ scheme: The ambitious One District One Product (ODOP) scheme of the Uttar Pradesh government has received praise from other countries for assisting in the revival of traditional crafts in the state. Now, on similar lines, the government has launched the One District One Sport (ODOS) programme for promoting local sporting talent. The Yogi Adityanath government hopes the ODOS programme will become a platform to create sportspersons who can represent the state at the national and international level. In each of the 75 districts of Uttar Pradesh, one sport would be identified, according to officials. Steps will be taken to find district-wise sport-specific talent and groom them.

Under ODOS, one sport will be identified in each of the 75 districts of UP and necessary steps taken to find district-wise sport-specific talents and hone their skills in order to enable them to represent the district, state, national and international level tournaments and championships.

ODOS programmes at a glance

Technotex to be held in Mumbai February 2023

Focus: To provide access and networking opportunities to meet top CEOs, manufacturers, industry peers, purchase managers and suppliers from India and around the globe.

The event will be organized by the Ministry of Textiles in collaboration with Federation of Indian Chambers of Commerce Industry, under National Technical Textiles Mission (NTTM). Darshana Jardosh, Union Minister of State for Textiles, addressing the recent curtain raiser event of Technotex 2023 in Mumbai, stated, “Keeping in view the high potential of start-ups in the technical textile arena, Technotex 2023 will focus on discussions to empower start-up ventures, promote knowledge exchange on best practices and develop capacities of entrepreneurial ecosystem for start-ups”.

The curtain raiser was organised in Mumbai to brief the Foreign Missions in the country, media houses and the technical textiles industry about the importance the Ministry gives to the upliftment of technical textiles sector and how relevant Technotex 2023 is for the attainment of this goal. The curtain raiser set the stage to make the summit a productive one through meaningful deliberations and interactions. Sharing more details on the event, Chandrakant Patil, Textiles Minister for Government of Maharashtra, highlighted that Maharashtra’s Textile Policy aims to generate 10 lakh new jobs and is hoping to attract investments worth Rs.36,000 crore.

NDDB and the Gujarat Cooperative Milk Marketing Federation have taken steps to provide necessary technical support for the production of milk in Sri Lanka.

Sri Lankan President Ranil Wickremesinghe has also appointed a panel of representatives from the public and private sectors to collaborate with the NDDB’s multidisciplinary team to develop a short, medium, and long-term plan to increase local milk production and reduce the country’s reliance on imported milk powder, according to the statement.

IIT Madras researchers develop Ocean Wave Energy converter: Indian Institute of Technology Madras (IIT Madras) Researchers have developed an ‘Ocean Wave Energy Converter’ that can generate electricity from sea waves. The trials of this device were successfully completed recently. The device was deployed at a location about 6 KM off the coast of Tuticorin, Tamil Nadu, at a location with a depth of 20 meter. This device targets generating 1MW of power from ocean waves in the next three years.

Currently, Sindhuja-I can produce 100 watts of energy. It will be scaled up to produce one megawatt of energy in the next three years. The Sindhuja-I system consists of a floating buoy, a spar and an electrical module. The buoy moves up and down as the waves oscillate up and down. There is a hole at the centre of this buoy that will allow the spar to pass through it. The spar is fixed to the seafloor to ensure that the waves don’t move it. But when the buoy moves and the spar doesn’t, the waves produce a relative motion between both. This relative motion is used by an electric generator to produce power.

The ATM was set up by the Goldsikka in collaboration with Opencube Technologies (Technology support). In this ATM, people can insert their debit or credit cards into the Goldsikka and buy gold coins. The ATM has a capacity of storing 5kgs of gold. There are 8 available options for the quantity of gold starting from 0.5 grams to 100 grams. “The prices are displayed live on the screen making it transparent and clear for the customers and the coins are dispensed in tamper proof packs certified with 999 purity,” he said.

Airtel partners with Meta for high-speed internet: Bharti Airtel has signed an agreement with the Facebook parent Meta to develop undersea cable infrastructure. The plan to extend 2Africa Pearls to India was announced by Meta in September 2021. In addition, Airtel will also integrate Meta’s WhatsApp within its CPaaS platform. With this integration, businesses will now be able to use WhatsApp and reach to provide omnichannel customer engagement to enterprises.

Aim: To support high-speed internet in the country and boost data-carrying capacities between geographies.

The two companies (Airtel and Meta), along with Saudi Telecommunication Company, will bring the world’s longest subsea cable system 2Africa Pearls to India, at Airtel’s landing station in Mumbai.

“Airtel is currently conducting trials for 4G and 5G Open RAN solutions on select sites in the state of Haryana and will commercially deploy the solution across several locations in India over the next few quarters,” the company said.

“We look forward to continuing our collaboration with Airtel to further advance the region’s connectivity infrastructure that will enable a better network experience for people and businesses across India,” Meta, vice president of mobile partnerships, Francisco Varela said.

US Unveils Its Newest Nuclear Stealth Bomber: The United States has unveiled its latest high-tech strategic bomber – the B-21 Raider – which is capable of carrying a nuclear payload and can be flown without a crew on board.

What More About this:

The next-generation stealth bomber was rolled out at arm’s manufacturer Northrop Grumman’s facility in California. The B-21 aircraft have a $700 million price tag per aircraft, and the US Air Force intends to purchase at least 100 of aircraft.

The new bombers are being unveiled when geopolitical tensions between the US, Russia, and China are at an all-time high due to the conflict in Ukraine and Taiwan’s territorial integrity. Russian and Chinese strategic bombers flew a joint eight-hour patrol over the western Pacific in a display of ongoing military cooperation between the two nations. China’s Defence Ministry called the mission a “routine” effort in bolstering defence ties with Russia. Moscow and Beijing are also currently developing strategic stealth bombers – China’s Xian H-20 and Russia’s nuclear-capable Tupolev PAK DA – which are expected to compete with the B-21.

What Has Been Said: Features Of The B-21:

While the B-21 is capable of taking to the air without a pilot, the US Air Force said the aircraft is “provisioned for the possibility, but there has been no decision to fly without a crew”. According to US Defence Secretary Lloyd Austin, the B-21 Raider is the first strategic bomber in more than three decades. Austin touted the aircraft’s range and superior design.

By 2035, China may possess 1,500 nuclear weapons. And the U.S. defense department said recently in its yearly China report that China’s gains in cyber warfare, space capabilities and other areas present the most serious “challenge to U.S. national security and the free and open international system.”