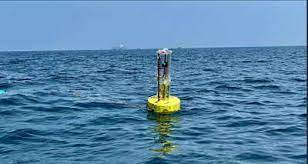 IIT Madras researchers develop Ocean Wave Energy converter: Indian Institute of Technology Madras (IIT Madras) Researchers have developed an ‘Ocean Wave Energy Converter’ that can generate electricity from sea waves. The trials of this device were successfully completed recently. The device was deployed at a location about 6 KM off the coast of Tuticorin, Tamil Nadu, at a location with a depth of 20 meter. This device targets generating 1MW of power from ocean waves in the next three years.

Currently, Sindhuja-I can produce 100 watts of energy. It will be scaled up to produce one megawatt of energy in the next three years. The Sindhuja-I system consists of a floating buoy, a spar and an electrical module. The buoy moves up and down as the waves oscillate up and down. There is a hole at the centre of this buoy that will allow the spar to pass through it. The spar is fixed to the seafloor to ensure that the waves don’t move it. But when the buoy moves and the spar doesn’t, the waves produce a relative motion between both. This relative motion is used by an electric generator to produce power.