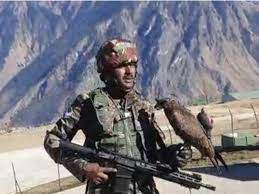 Indian Army is training dogs and Kites to Identify Foreign Drones: Indian Army is training dogs and Kites (Cheel), to identify and destroy the drones. Hostile elements from Pakistan are sending drugs, arms, and ammunition to India through drones which are creating a security problem for India. On November 24, 2022, Jammu and Kashmir police recovered a consignment of weapons and Indian currency dropped by a Pakistani drone in Jammu’s Samba district.