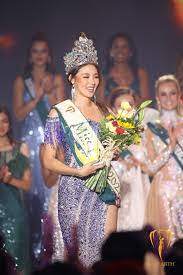 Andrea Aguilera of Columbia is Miss Fire 2022, Nadeen Ayoub of Palestine is Miss Water 2022, and Sheridan Mortlock of Australia is Miss Air 2022. During the pre-pageant activities, Choi bagged a few medals too. She won resort wear, long gown, beach wear, and swimsuit competition.

Destiny Wagner, the first woman from Belize to win a major international crown, left the title to the new queen. Destiny Wagner was the winner of a virtual tournament held in 2021. Elements queens were crowned at the culmination of the completion. The Philippines’ representative, Filipino-America Psychology student Jenny Ramp from the province of Tarlac, finished in the Top 20.

She was also proclaimed the best in Fauna Costume for Asia and Oceania. This is the 22nd edition of Carousel Production’s annual international competition to promote environmental conservation. It also sought ambassadors to spearhead environmental projects. Till now, four Filipino women have received the title including Karla Henry in 2008, Jamie Herrell in 2014, Angelia Ong in 2015, and Karen Ibasco in 2017.