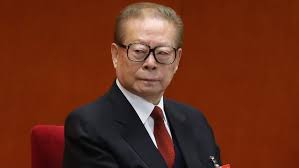 Following the 1989 Tiananmen Square crackdown, Jiang Zemin governed over the Communist Party’s divisions while leading China through historic changes. Market-oriented reforms were revived, Hong Kong gained independence from the British in 1997, and Beijing joined the World Trade Organization (WTO) in 2001. He helped pulling in foreign investment after China joined the WTO. Jiang Zemin served as the head of the Communist Party from 1989 to 2002. From 1993 to 2003, he was China’s President.  From 1989 to 2004, he was also the chairman of the Central Military Commission.

In 2002 Jiang Zemin resigned as general secretary of the CCP and the following year stepped down as president after serving the maximum two 5-year terms; Hu Jintao succeeded him in both positions. Jiang Zemin remained in charge of the Central Military Commission until stepping down in favour of Hu Jintao in 2004.