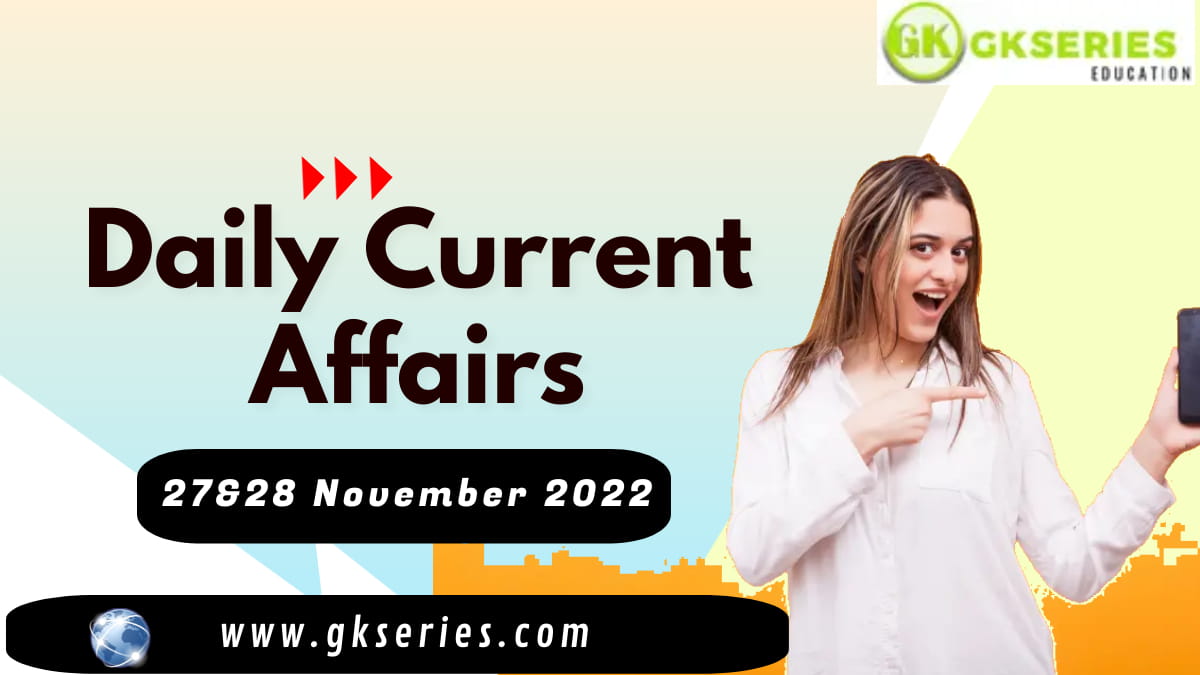 Current Affairs is the most important area in all competitive exams. But the difficulty level is very high. That’s why; many aspirants get confused, how to select Current Affairs for Preparation of Competitive Examination? In this Post, Daily Current Affairs 27&28 November 2022, we have tried to cover each and every point and also included all important facts from National/ International news that are useful for upcoming competitive examinations such as UPSC, SSC, Railway, State Govt. etc.

Formation of the NCC:

The National Cadet Corps Act of 1948 established the NCC in India after independence, and it was established on July 15, 1948. The NCC is a voluntary military cadet corps under the Union Ministry of Defence and is open to school and college students. It was set up to create a human resource of organized, trained and motivate youth to provide leadership in all walks of life and always available for the service of the nation.

Deepa highlighted that “health is the ultimate wealth”, urging participation in the movement, contributing to building momentum to ensure India becomes free of TB by 2025. She further extended her support to the campaign by becoming a Ni-Kshay Mitra, an initiative launched by President Droupadi Murmu which strives to provide aid to TB-afflicted patients on three levels of nutritional, additional diagnostic, and vocational support.

US Bans the Use of Chinese Companies Huawei, ZTE Telecom Equipment Sales

US Bans the Use of Chinese Companies Huawei, ZTE Telecom Equipment Sales: The Biden administration has prohibited new telecommunications equipment from China’s Huawei Technologies and ZTE from being approved because they pose a “unacceptable risk” to US national security.

What Has been Said:

The FCC’s five members voted unanimously to adopt new rules that will prohibit the importation or sale of the targeted products. These new rules are an important part of our ongoing actions to protect the American people from national security threats involving telecommunications,” FCC Chairperson Jessica Rosenworcel said in a statement. He added that the move had “broad, bipartisan backing” among the US congressional leadership.

According to the FCC, the prohibition is the latest step in a years-long effort “to keep US networks safe” by identifying and blocking devices deemed to be security concerns. “The Chinese Communist Party will stop at nothing to exploit our laws and undermine our national security,” he said in a statement. “This legislation fixes a dangerous loophole in our law, curtailing their efforts to worm their way into our telecommunications networks.”

Why US Govt Opted This:

The move represents Washington’s latest crackdown on the Chinese tech giants amid fears that Beijing could use Chinese tech companies to spy on Americans.

US security officials have warned that equipment from Chinese brands such as Huawei could be used to interfere with fifth-generation (5G) wireless networks and collect sensitive information.

The services identified as threats under that law were subsequently subject to the Secure Equipment Act of 2021, which was signed into law by President Joe Biden. That act created the groundwork for Friday’s announcement. It directed the FCC to “adopt rules clarifying that it will no longer review or issue new equipment licenses” to those companies.

Republic Day 2023: Egypt’s President Abdel Fattah el-Sisi has been invited to be the primary guest for India’s Republic Day in 2023, indicating New Delhi’s continued focus on the Arab world as it prepares for a year of high-profile diplomatic engagements. The formal invitation was handed over when external affairs minister S Jaishankar met Sisi in Cairo on October 16 during an official visit to Egypt, the people said. Egypt is among the nine guest countries invited to the G20 Summit under India’s presidency in 2023.

An invitation as chief guest for the Republic Day celebrations on January 26 is a signal honour reserved for the country’s close allies and partners. There were no chief guests at the celebrations in 2021 and 2022, largely because of disruptions caused by the Covid-19 pandemic. Former Brazilian President Jair Bolsonaro was the last chief guest to participate the 2020 celebrations.

The 68-year-old general-turned-politician will be the first Egyptian leader to be invited by India for Republic Day celebrations, despite the fact that the two nations have had strong ties for decades, particularly as founding members of the Non-Aligned Movement in 1961. Egypt faced serious domestic political issues such as the Arab Spring protests and a severe economic crisis at a time when India’s focus moved towards the Gulf countries because of interests such as energy, trade, investments and the presence of millions of expatriates.

Proposal to degrade the status of Southern white rhino from Appendix I to Appendix II was accepted at COP19 to CITES.

Proposal to degrade the status of Southern white rhino from Appendix I to Appendix II was accepted at COP19 to CITES.: The proposal was given by Botswana and Namibia. However, the parties rejected the proposal of Eswatini (formerly known as Swaziland) to allow trade in rhino horns. King Mswati III International Airport in Eswatini is a hub for rhino horns imported illegally from South Africa and other southern African countries.

Under Appendix II, the animals may not be threatened with extinction but the trade of such animals should be controlled.

It is the most common and widespread subspecies of rhinos. It is the second largest and heaviest land mammal. The maximum population of southern white rhino lives in South Africa, Namibia, Zimbabwe, Kenya and Uganda.

Second edition of ‘75 Creative Minds of Tomorrow’ concluded with the award ceremony of the “53-Hour Challenge”.

The Challenge was launched on 21st November by Union Minister for Information & Broadcasting and Youth Affairs & Sports, with hitting the gong and kickstarting the event. This segment of IFFI 53 is powered by National Film Development Corporation in collaboration with Shorts TV. The Challenge had its finale. Over the course of the 53 hours, 5 short films were created. From the shoot to the final film delivery, the filmmakers worked non-stop to bring their scripts to life.

During 53 hour deadline, 5 short films were made. Film ‘Dear Diary’ has won 53-Hour Challenge for 75 creative minds. It was made by Team Purple. It highlights the issue of women’s safety. Antardrishti, The Ring, Almost and Sau Ka Note are the other four films made in the competition.

India will launch ‘tilting trains’ by 2026

India will launch ‘tilting trains’ by 2026: The Indian Railway department is all set to bring tilting trains in the country by 2025-26. The technology will be used in manufacturing almost 100 Vande Bharat trains.

The technology will enable trains to maneuver curves at higher speeds, just as a motorbike on a winding road, reported PTI citing a senior official on Friday. He said 100 of the 400 Vande Bharat trains to be manufactured by 2025 will have this technology.

Explaining how such trains work, an official said as a train rounds a curve at speed, it cause objects to slide about. While it makes the seated passengers feel squashed by the armrest, standing passengers tend to lose their balance.

Film ‘Dear Diary’ wins 53-Hour Challenge for 75 creative minds: The second edition of ‘75 Creative Minds of Tomorrow’ at International Film Festival of India (IFFI) in Goa concluded with the award ceremony of the “53-Hour Challenge”. The competition provided a challenge to the 75 Creative Minds selected from all over the country to produce a short film on their idea of India@100, all in 53 hours.

The competition was launched on Monday, by Union Information & Broadcasting Minister Anurag Singh Thakur. During 53 hour deadline, 5 short films were made. From the shoot, to the final film delivery, the filmmakers worked non-stop, to bring their scripts to life. The film ‘Dear Diary’ made by Team Purple, has been adjudged as the best movie. The winning film highlights the issue of women’s safety. The other four films made under the competition are Antardrishti, The Ring, Almost and Sau Ka Note. All five films will be telecast across India on Shorts TV on Sunday at 9 PM. The competition was organised by National Film Development Corporation in collaboration with Shorts TV.

Centre releases ₹17,000-crore GST compensation to States: The Centre released ₹17,000 crore to states towards the balance of Goods and Services Tax (GST) compensation. This takes the total amount released so far in the fiscal year to over ₹1.15 lakh crore.

“With this, the Centre has released in advance the entire amount of cess estimated to be collected this year till March-end available for payment of compensation to states,” the ministry said in a statement. This is despite the fact that total GST cess collection till October 2022 was only ₹72,147 crore. And, the balance of ₹43,515 crore is being released by the Centre from its own resources.

India Forms Panel to Revamp Only Govt Job Guarantee Scheme: India’s federal rural development ministry has formed a panel to revamp its only job guarantee scheme in the hope of directing more work to the country’s poorer regions, a senior government official said on Friday.

The Mahatma Gandhi National Rural Employment Guarantee Scheme, or MNREGA, was in high demand in the Asian nation’s rural areas as they emerged from the pandemic amid soaring inflation and limited non-farm job opportunities. Residents of relatively affluent states, however, may have fared better in securing work under the key anti-poverty job program, triggering calls for changes to the scheme.

“The panel will recommend institutional mechanisms, including governance and administrative structures, for more effective utilization of funds, especially to address poverty,” the official said. The panel, which is expected to submit its report by January, will examine expenditure trends across various states and identify reasons for variations, the official added. According to official data, states such as Bihar and Odisha spend less on the employment scheme than states such as Tamil Nadu and Rajasthan, which have a higher per-capita income.

The MNREGA jobs programme, introduced more than 15 years ago, allows citizens to enrol for work such as building roads, digging wells or creating other rural infrastructure, and receive a minimum wage for 100 days each year.

The government’s expenditure on job guarantees is one of the largest social sector budget items. For fiscal 2022-23, New Delhi has allocated 730 billion Indian rupees ($8.94 billion) to the jobs scheme, a decrease from the previous year’s record grant of 1.1 trillion rupees. However, the allocation could be increased in the final quarter of this fiscal. The government may raise rural spending to 2 trillion rupees next fiscal year.

The revaluation of the scheme comes as rural unemployment in India has remained above 7% for most of the current fiscal year, according to data from the Centre for Monitoring Indian Economy (CMIE).