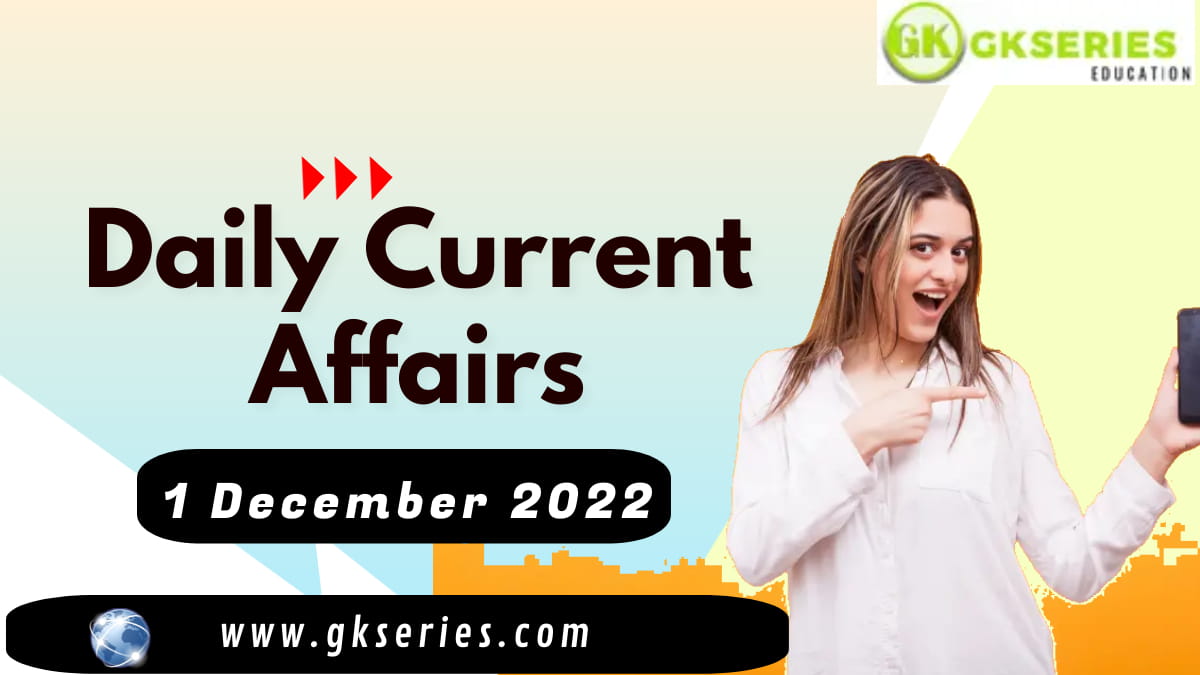 Current Affairs is the most important area in all competitive exams. But the difficulty level is very high. That’s why; many aspirants get confused, how to select Current Affairs for Preparation of Competitive Examination? In this Post, Daily Current Affairs 1 December 2022, we have tried to cover each and every point and also included all important facts from National/ International news that are useful for upcoming competitive examinations such as UPSC, SSC, Railway, State Govt. etc.

World AIDS Day 2022: Every year on December 1st, the world observes World AIDS Day. People around the world unite to show support for people living with and affected by HIV and to remember those who lost their lives to AIDS. The goal of the day is to promote awareness and unite people all around the world in the fight against the global health issue of acquired immunodeficiency syndrome. The day provides an opportunity for people worldwide to unite in the fight against HIV, to show support for people living with HIV and to commemorate those who have died from an AIDS-related illness.

The theme for World AIDS Day in 2022 is “equalize.” According to UNAIDS, “The slogan is a call to action. It is a prompt for all of us to work for the proven practical actions needed to address inequalities and help end AIDS.

World AIDS Day is significant in fighting the stigma associated with the disease and focusing on providing care and support to individuals who are already infected. Like with most major public health issues, the HIV pandemic has only been presented with further challenges due to the Covid-19 pandemic.

World AIDS Day was first designated in August 1988 by James W. Bunn and Thomas Netter, to get some semblance of control over the pandemic that had claimed the lives of so many people. Both James W Bunn and Thomas Netter worked as public information officers for the World Health Organization’s AIDS Global Program. When the first World AIDS Day was marked in 1988, it was estimated that between 90,000 and 150,000 persons were HIV-positive, leading to AIDS.  They conveyed the idea for the observation of this day to the Director of the AIDS Global Program, Dr Johnathan Mann, who approved it for December 1. Since the 1990s, research and medical practises have made significant improvements in the care of HIV patients.

Senior journalist Ravish Kumar resigns from NDTV following Adani acquisition: Ramon Magsaysay award-winning journalist Ravish Kumar has resigned from NDTV on Wednesday, just a day after the channel’s founders and promoters Prannoy Roy and Radhika Roy resigned as directors from the board of the news broadcaster’s promoter entity RRPR Holding Private Limited. The departure of the senior journalists comes after the news channel was acquired by the Adani Group, which holds 29.18% of the company.

Prannoy Roy and his wife Radhika Roy had resigned as Directors on the Board of RRPR Holding Private Limited, the company said in a regulatory filing on Tuesday. RRPR Holding’s board of directors has approved the immediate appointment of Sudipta Bhattacharya, Sanjay Pugalia, and Senthil Sinniah Chengalvarayan as Directors.

Career of Ravish Kumar in NDTV:

Whole story of the acquisition:

The BSF, which was established in 1965, is primarily responsible for securing India’s borders with Bangladesh and Pakistan. The Border Security Force (BSF) comprises Indian armed personnel dedicated to protecting the sovereignty and integrity along the Indo-Bangladesh and the Indo-Pakistan borders. Beginning with BSF Raising Day, personnel roll across Gujarat, Rajasthan, Punjab, and Jammu and Kashmir, securing the LoC (Indo-Pakistan border) from rogue elements attempting to enter along the western borders.

They operate in West Bengal, Meghalaya, Assam, Mizoram, and Tripura along the Indo-Bangladesh border. The jurisdictions of BSF empower them to act within 50-km of the international border in these states. BSF has an anti-Naxal HQ in Bangalore. It provides oversight to the various battalions dedicated to fighting Naxalites in the red corridor region. The BSF has played an exemplary role in counter-Naxalite and counter-insurgency operations over the last 4-decades. It also tackled counter-insurgency in the Seven Sisters states and played a vital role in eliminating anti-national elements across India.

Since its raising, the contribution of BSF to national security has a rich legacy as the brave recipient of the Mahavir Chakra. During the insurgency in 1990 over Jammu and Kashmir, BSF played a crucial role in limiting it from spreading to the neighbouring states of Himachal Pradesh and Punjab.

IAS officer Preeti Sudan appointed as a member of UPSC

IAS officer Preeti Sudan appointed as a member of UPSC: Preeti Sudan, an Andhra Pradesh cadre IAS officer and former health secretary, has took the oath of office and secrecy as a Member of the UPSC. The oath was administered to her by the UPSC chairman Dr Manoj Soni. Sudan will step down as Union Health Secretary in July 2020. She also served as Secretary of Food and Public Distribution, as well as in the Ministries of Women and Child Development and Defense.

Preeti Sudan holds an M.Phil in Economics and an MSc in Social Policy and Planning from the LSE. Amongst her notable contributions have been initiating two major flagship programmes of the country, i.e., Beti Bachao, Beti Padhao and Ayushman Bharat, apart from Legislation on National Medical Commission, Allied Health Professionals Commission & ban on E-cigarettes. Sudan also was a consultant for the World Bank. She served as Chair of COP-8 of Framework Convention on Tobacco Control, Vice Chair of Partnership for Maternal, Newborn and Child Health, Chair of Global Digital Health Partnership and as member of WHO’s Independent Panel for Pandemic Preparedness and Response.

The UPSC is led by a chairperson and has a maximum membership of ten members. With Sudan’s appointment, there is still a vacancy of four members in the Commission. The UPSC is India’s principal central recruitment agency for all Group ‘A’ officers employed by the Government of India. The body conducts civil services examination annually in three stages — preliminary, main and interview — to select officers of Indian Administrative Service (IAS), Indian Foreign Service (IFS) and Indian Police Service (IPS) among others.

Uttarakhand Government appoints Prasoon Joshi as its Brand Ambassador: Prasoon Joshi, CEO & CCO of McCann Worldgroup India, has been named as the state’s brand ambassador by the Uttarakhand government. Padma Shri awardee Prasoon Joshi is currently the Chairman of the Central Board of Film Certification (Censor Board). He is a famous and highly awarded member of the Indian advertising and media fraternity. Joshi has also written the lyrics for songs in popular Bollywood movies such as Rang De Basanti, Fanaa and Taare Zameen Par. He also penned the screenplay for the award-winning 2013 film Bhaag Milkha Bhaag.

Prasoon Joshi is a native of Uttarakhand, the state administration has authorised the director general of culture to enter a Memorandum of Understanding with Joshi in this regard. Joshi is well-known for his work and content creation in the fields of advertising, poetry, songwriting, and cinema. His socially relevant campaigns like Malnutrition Polio eradication, Women empowerment Ministry of tourism, and the Swachh Bharat Abhiyaan (Clean India) have all won accolades and found deep and powerful consumer connect. He was also a key architect of the 2014 National Election campaign. Joshi’s campaign for HappyDent gum, “The HappyDent Palace,” was ranked as one of the “Top 20 Campaigns of the 21st Century” by The Gunn Report.

Earlier this month, the Uttarakhand government bestowed the Uttarakhand Gaurav Samman honour to Joshi for his contributions to art, literature, culture and advertising. He has received several prestigious international honours, including the World Economic Forum’s Young Global Leader award in 2006.  He was also the first Asian to become the jury president at the Cannes International Festival of Creativity in 2014 for the prestigious Titanium category.

Key points in the report:

Indian Army is training dogs and Kites to Identify Foreign Drones: Indian Army is training dogs and Kites (Cheel), to identify and destroy the drones. Hostile elements from Pakistan are sending drugs, arms, and ammunition to India through drones which are creating a security problem for India. On November 24, 2022, Jammu and Kashmir police recovered a consignment of weapons and Indian currency dropped by a Pakistani drone in Jammu’s Samba district.

Vikram S Kirloskar participates in a variety of extracurricular activities at MIT. Vikram later served on the Board of Trustees of The Rhode Island School of Design. Vikram started working in his family business after college, initially in production engineering. Early in his career, he designed and developed a variety of processes and machine tools.  He was involved in opening the import licensing for capital equipment while serving on the government’s development council for machine tools in the late 1980s.

The FSSAI’s recognition of the Yak as a food-producing animal will help farmers benefit economically from rearing the animal and will open up several vistas of economic benefits for both farmers and food processors. Yaks have traditionally been raised through a primitive, unorganised, and complex transhumance system. It is widely assumed that the FSSAI’s declaration of the yak as a food animal will pave the way for its commercial rearing and consumption through the use of the yak-rearing model developed by NRC-Yak.

YAK is a mountain cow that lives at the world’s highest altitudes. YAK originated in the Himalayas of Nepal, Tibet, and Mongolia before being introduced to the United States, Canada, New Zealand, and parts of Europe. YAKs are animals with bigger lungs and hearts, as well as a better capacity for oxygen delivery through their blood, due to the persistence of hemoglobin throughout life.

Monkeypox Disease Name Changed to Mpox by WHO: The World Health Organisation has changed the name of the disease Monkeypox to Mpox, as they receive complaints about the word Monkeypox conjuring up racist tropes and stigmatizing patients. The recommendation comes in the wake of outbreaks in Europe and the United States that began around six months ago.

Mpox has been circulating for decades in rural developing areas of Central and West Africa.  WHO will adopt the term Mpox in its communications and encourages others to follow these recommendations. This decision was made in order to reduce the continued negative impact of the current name and the adoption of the new name. The name was inspired by a colony of caged lab monkeys in Denmark, where the virus was first identified by researchers. The WHO has promoted new criteria for naming infectious diseases. According to the recommendations, names should try to prevent needless negative impacts on travel, tourism, or animal welfare. The criteria also avoid causing any offense to culture, social, national, regional, professional, or ethnic groups. The critics informed that Monkeypox reinforced ugly western stereotypes about Africa as a reservoir of pestilence and sexually transmitted pathogens. It was also advised that it contributed to racial beliefs strongly rooted in American culture that compare Black people to primates.