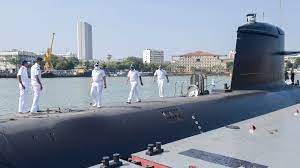 INS Vela would form part of the Western Naval Command’s Submarine fleet and would be another potent part of its arsenal. The new Vela carries forward the legacy of her namesake, the erstwhile INS Vela which was commissioned on 31 Aug 1973 as the lead boat of Vela class submarines.

It has been built by Mazagon Dock Shipbuilders Ltd in collaboration with M/s Naval Group of France.