1 Who has been re-elected as President of Nigeria?
A Muhammadu Buhari
B Bujar Nishani
C Atiku Abubakar
D Hassan Rouhani

Nigerian President Muhammadu Buhari has been re-elected for a second four-year term. Buhari, of the ruling All Progressives Congress party, secured 56 percent, or 15.2 million votes, in the February 23 polls.
2 In which year will NASA launch the Atmospheric Waves Experiment?
A 2022
B 2023
C 2024
D 2025

NASA has selected a $42 million mission, Atmospheric Waves Experiment, that will help scientists understand and, ultimately, forecast the vast space weather system around our planet. 9/17 It will be launched in August 2022, attached to the exterior of the Earth-orbiting International Space Station (ISS). AWE will focus on colourful bands of light in Earth's atmosphere, called airglow.
3 Who is appointed as the Chairman of National Book Trust (NBT)?
A Vishwanath Prasad Tiwari
B Prakash Javadekar
C Rita Chowdhury
D Govind Prasad Sharma

Educationist and Author Govind Prasad Sharma has been appointed as the Chairman of National Book Trust (NBT).
4 In which state was an ancient petroglyph site with 19 unique rock artwork discovered by the researcher, T Murugeshi?
A Telangana
B Kerala
C Tamil Nadu
D Karnataka

An ancient petroglyph site with 19 unique rock artwork was discovered near Kollur in Karnataka by the researcher, T Murugeshi. The carvings were discovered at Avalakki Parenear Kollur, a grazing plain land of 15-20 acres inside the reserve forest. Petroglyphs are images created by removing part of a rock surface by incising, picking, or carving as a form of rock art.
5 Where was India’s 1st Indigenous Semiconductor Chip unveiled by semiconductor company, 'SIGNALCHIP' for 4G/LTE and 5G NR MODEMs?
A Delhi
B Andhra Pradesh
C Karnataka
D Uttar Pradesh

BioAsia 2019-Asias largest Life-sciences and healthcare forum held in Hyderabad.
7 Which of the following defence satellite would be launched by ISRO for DRDO in March 2019?
A HySIS
B Microsat R
C Emisat
D Kalam SAT

Indian Space Research Organisation (ISRO) is set to launch an electronic intelligence satellite 'Emisat' for the DRDO in March.
8 When is the National Science Day celebrated across India every year?
A 25 February
B 26 February
C 27 February
D 28 February

National Science Day is celebrated across India on February 28 every year. Famous Indian scientist Sir Chandrasekhara Venkata Raman or CV Raman discovered the Raman Effect on this day in 1928. The theme for this year is Science for people and people for science. Sir CV Raman was awarded the Nobel Prize in Physics in 1930 for his discovery.
9 Which State government launched the major water conservation scheme Jalamrutha?
A Telangana
B Uttar Pardesh
C J&K
D Karnataka

Karnataka is set to launch a major water conservation scheme titled ‘Jalamrutha’, which focusses on drought-proofing measures, including protection and rejuvenation of water bodies.

Q. What is the actual shape of the Earth ?
Q. Which from the following sets belongs to Central tax?
Q. The most important uranium mine of India is located at:
Q. Rusting of iron is due to-
Q. The President of India can issue a proclamation of National Emergency only on the written recommendation of
Q. “War begins in the minds of men” is a famous Vedic saying. It is stated in:
Q. With which musical instrument is Hari Prasad Chaurasia associated ?
Q. The sharpness of a television image is termed as
Q. Which one of the following is not a heterotroph ?
Q. Insufficient blood supply in human body is referred as 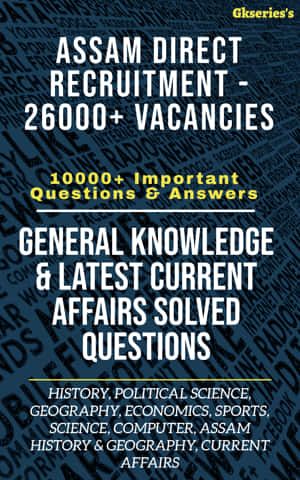