1 Where was the 'Forbes India Leadership Awards' held on 22 November 2018?
A Mumbai
B Hyderabad
C New Delhi
D Chandigarh

The 'Forbes India Leadership Awards' was held on November 22 in Mumbai. The award honours the top executives of companies in India. Azim Premji, Chairman of Wipro Limited, got the 'Lifetime Achievement Award 2018'. Vivek Chaand Sehgal, Chairman of Motherson Sumi Systems, got the 'Entrepreneur for the Year 2018 award'.
2 Who is appointed as acting Executive Director of UNEP?
A Williams John
B Dilip Misra
C Suresh Kannan
D Joyce Mysuya

3 As per the 'India Skills Report 2019', which state has topped the list of states with the highest employability?
A Rajasthan
B Andhra Pradesh
C Punjab
D Haryana

As per the 'India Skills Report 2019', Andhra Pradesh has topped the list of states with the highest employability followed by Rajasthan and Haryana. The report also said that the employability levels of engineering graduates have increased across all the sectors. The report was published jointly by Wheebox, PeopleStrong and Confederation of Indian Industry (CII).
4 Which award did Manipal Academy of Higher Education won in the International Green Apple Award for environmental best practice 2018?
A Gold
B Silver
C Bronze
D Platinum

General insurance company 'HDFC ERGO General Insurance' has set up a remote sensing lab for crop insurance. The lab will work on accurately assessing the risks of the insurers and will also be able to give early warnings about the losses. Remote sensing involves setting up scanning an area through the use of satellite to get deeper information about that region.
6 Who conferred the Mexican Order of the Aztec Eagle, highest recognition to be given to a foreigner by Mexico?
A Suresh Iyer
B Naresh Iyer
C Ananth Kumar
D S. P Ganguly

S. P Ganguly conferred the Mexican Order of the Aztec Eagle, highest recognition to be given to a foreigner by Mexico.
7 Satya Pal Malik inaugurated a week-long 'Jhiri Mela' at ________ on 23 November 2018.
A Mussoorie
B Dehradun
C Shimla
D Jammu

Jammu and Kashmir Governor Satya Pal Malik inaugurated a week-long 'Jhiri Mela' at village Jhiri in Jammu district on 23 November 2018. The annual fair is commemorated in the memory of the martyrdom of 'Baba Jittoo'. He was a farmer who gave up his life about 500 years ago in protest against the oppressive demands of a landlord.
8 Designers of ‘Urban wind turbine’ O-Wind Turbine, Nicolas Orellana of Chile and Yaseen Noorani from Kenya won ----------?
A The Grammys
B The BAFTA Awards
C The BRIT Awards
D International James Dyson award

The three-day 'Jangalmahal festival' was inaugurated in Kolkata on 23 November 2018. The aim of the festival is to revive and popularise the culture and heritage of the Jangalmahal area. The forested areas of West Midnapore, Jhargram, Bankura and Purulia districts in the southern part of the West Bengal form the Jangalmahal area.
10 Which of the following has been declared as a 'non-transport vehicle' by the Government of India under the Motor Vehicles Act 1988, on 23 November 2018?
A Bicycle
B E Rickshaw
C Quadricycle
D Quad Bike

The government of India has declared quadricycle as a 'non-transport vehicle' under the Motor Vehicles Act 1988. This will provide a safe and cheap mode of transport for the last mile connectivity. A non-transport vehicle is a vehicle whose usage is allowed under personal capacity only. A quadricycle is a vehicle with the size of a three-wheeler but has four tyres and is fully covered.
Advertisement 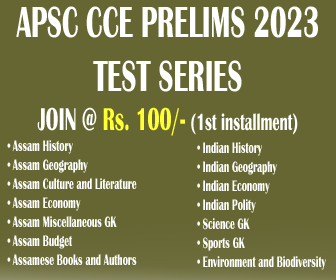