To crack any competitive exam like SSC, Railways, Insurance, UPSC, CLAT, Banking, State PSC Exams and other exams it is very important to answer all current affairs questions correctly. Gkseries Updates Current Affairs and Q&A packages in compiled and sorted topic wise to ensure easy accessibility of the information.

1 Who has been awarded the 8th Social Entrepreneur of the Year award, 2018?
A Sanjiv Bajaj
B Anil Agarwal
C Dilip Shanghvi
D Prema Gopalan

Prema Gopalan, founder of Swayam Shikshan Prayog (SSP), was awarded the 8th Social Entrepreneur of the Year award, 2018. She was awarded for her work in promoting women’s entrepreneurship at the grassroots and ensuring rural livelihood. The award was jointly founded by Jubilant Bhartia Foundation and Schwab Foundation for Social Entrepreneurship in 2010.
2 Who Lifts Santo Domingo Open Trophy ?
A Mahesh Bhupathi
B Leander Paes
C Divij Sharan
D Sania Mirza

Alia Bhatt has been appointed as the new brand ambassador for Nokia phones in India. In early 2018 Nokia had appointed Parineeti Chopra as the face of its mobile phones. As part of the partnership, a print campaign with Alia Bhatt has been initiated already to mark the festive season.HMD Global designs and sells phones under the Nokia brand.
4 Who has been appointed as the chairperson of National Commission for Protection of Child Rights (NCPCR) ?
A Swaminathan
B Dinesh Karthick
C Suresh Kumar
D Priyank Kanoongo

Priyank Kanoongo appointed chairperson of National Commission for Protection of Child Rights (NCPCR).
5 Who has been approved as the Managing Director and CEO of the ICICI bank for three years by Reserve Bank of India on 16 October 2018?
A Usha Ananthasubramanian
B Rajnish Kumar
C Sandeep Bakshi
D T N Manoharan

Reserve Bank of India (RBI) has approved Sandeep Bakshi’s appointment as Managing Director and CEO of the ICICI bank for three years. Sandeep Bakshi was the Chief Operating Officer (COO) of ICICI Bank. He was also the MD and CEO of ICICI Prudential Life Insurance Company. Sandeep Bakshi was appointed as CEO after the resignation of Chanda Kochhar.
6 For which company did RBI approve the license to operate as a Non-Banking Financial Company (NBFC)?
A KFW Bankgruppe
B BayernLB
C Kreditech
D Deutsche Bank

RBI approved the license for Kreditech, the Germany-based company to operate as a Non-Banking Financial Company (NBFC) licence for digital lending business and app-based financing.
7 Which state has ensured food security to more than 8.5 crore people of the State under the ‘Khadya Sathi’ scheme?
A West Bengal
B Haryana
C Uttar Pradesh
D Madhya Pradesh

The West Bengal government has ensured food security to more than 8.5 crore people of the State under the ‘Khadya Sathi’ scheme. As per this scheme, people would get rice and wheat at Rs 2 per kg. The Khadya Sathi Scheme was launched on January 27, 2016. Special assistance is also being given to the people of Jangalmahal and Hill areas besides Aila-affected areas and farmers of Singur.
8 When is the World Food Day observed annually?
A 14 October
B 15 October
C 16 October
D 17 October

World Food Day is held annually on the 16th of October. This day is dedicated to tackle the problem of global hunger. The theme for the year 2018 is "Our Actions Are Our Future". Every year World Food Day is celebrated in the honour of the founding date of the Food and Agriculture Organization (FAO). FAO was launched by the United Nations in the year 1945.
9 Who won the "Social Entrepreneur of the Year" award, 2018 ?
A Dinesh karthick
B Sakthi Rajan
C Vivek Sharma
D Prema Gopalan

Indian Institutes of Technology (IIT) in Mumbai has topped the first QS ranking of India’s higher education institutes. IIT Mumbai was followed by the Indian Institute of Science (IISc) in Bengaluru and IIT Madras. According to the QS World University Rankings released earlier in 2018, IISc was ranked the best institution. 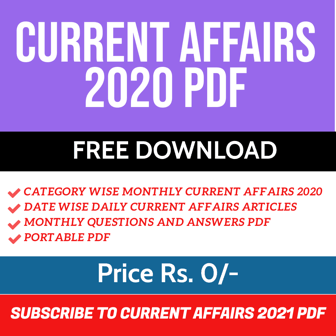